When the M&A deal falters

In this blog post, Michael Richards, Chief Growth Officer at alan. discuss how audiences play a vital role in supporting an organisation through an M&A.

A meaty merger and acquisition (M&A) deal is the ‘stop press’ moment of the business world. High stakes, big bosses, global brands and billion-dollar takeovers – these deals instil excitement and energy into a world that can sometimes appear staid and safe.

And few deals thrilled – within the business world and beyond – like Elon Musk’s announcement on 14th April that he was going to buy Twitter for $44bn after already building his shares in the social media platform. But in less than three months, on 8th July, Musk said he was terminating the agreement, only to be followed by a US judge ruling that a trial could start in October where Twitter will try to force Musk to see through the takeover.

There will no doubt be more twists and turns yet in this high-profile saga – not least Twitter missing its second quarter financial estimates, blaming ad industry headwinds and “uncertainty” tied to the pending acquisition of the company by Elon Musk.

This Twitter drama is a perfect example of the brand and business implications that can come from troublesome M&As – both in the short and the long term – and not forgetting merger failure rates are put at between 50 – 85%.

So, what needs to be done to avoid getting into the kind of mess that Musk and Twitter are currently contending with?

Do the Due Diligence

As this debacle has proven, doing due diligence on any prospective partner is vital. Companies must analyse intent – and Musk was always pretty sketchy on this – and means; but they must also consider how compatible the two cultures are, the business practices, as well as the brand identities. If we look at an unsuccessful M&A, like AOL and TimeWarner, there were clear issues with the cultural and brand elements of the deal.

In the present example, Musk’s free speech absolutism was clearly at odds with Twitter’s responsible approach to limiting hate speech. Such a fissure not only has the potential to create tensions during negotiations but is a fundamental fault line when it comes to integrating the companies if a deal does pass.

This is a strong argument for why marketing should be involved upstream in M&A strategy. Too often it’s only brought in much further down the line, when marketing teams get given the simpler task of deciding one brand versus the other or how best to roll out a brand refresh. Instead, marketing can bring demonstrable strategic value by being more integral to the deal and in assessing implications and evaluating the real-term brand equity inherent in the opportunity.

Knowing the brand truth should help guide how the business conducts itself during the M&A process. The worst thing a brand can do is to feel compelled to alter its position or react and change tack because negotiations are not going its way. Unless – of course – it’s been found out for something that clearly needs addressing.

Arguably the mistake that Twitter has made is that it has become embroiled in a very public spat with a highly adept protagonist – one who has used its own platform against it. As some commentators have described, Twitter has been courted then jilted.

This does risk undermining Twitter’s brand position in the minds of its audience groups. Current and potential customers rightly expect a consistency of behaviour, and this lack of decorum is damaging for the brand (never mind the immediate impact it had on its share price).

Amid M&A activity, brands need to maintain both integrity and dignity, so they retain control of the narrative and safeguard the brand – whatever the ultimate outcome.

In the breakdown of a relationship, a brand’s position and what it stands for is vital. It must stand by its morals, be guided by its beliefs, and never doubt its character. It might be that this is just the wrong deal, the right match hasn’t yet been found. Sometimes, it’s just down to timing.

Consider All the Audiences

I’d argue that the users and customers of a brand are the least important group in the M&A process. Firstly, it won’t usually be on their radar – here Musk is the exception to the rule because of his huge public profile – and secondly, M&A is far too abstract for most of the public.

Putting the obvious relevance of the investor community to one side, the most important audience group is the employees. They are going to be the ones who are most emotionally invested and key to longer-term success – but they are too often overlooked. One of the reasons it’s so important for brands to uphold their values is so that their employees feel represented – but also to talk up the values and compatibility of the other brand in the equation. This is again where Twitter has mis-stepped with its legal filing. It is quite fairly slating Musk but as the legal case is to enforce the deal, it’s also risking the future engagement of its employees.

M&As may or may not be successful – but audiences do play a vital role. They will support an organisation through tough times, but only if they still believe in what it stands for.

What’s more detrimental than a public break up of a relationship or deal, is witnessing a brand that bends in all directions to get the deal done, at the cost of losing sight of what it stands for. 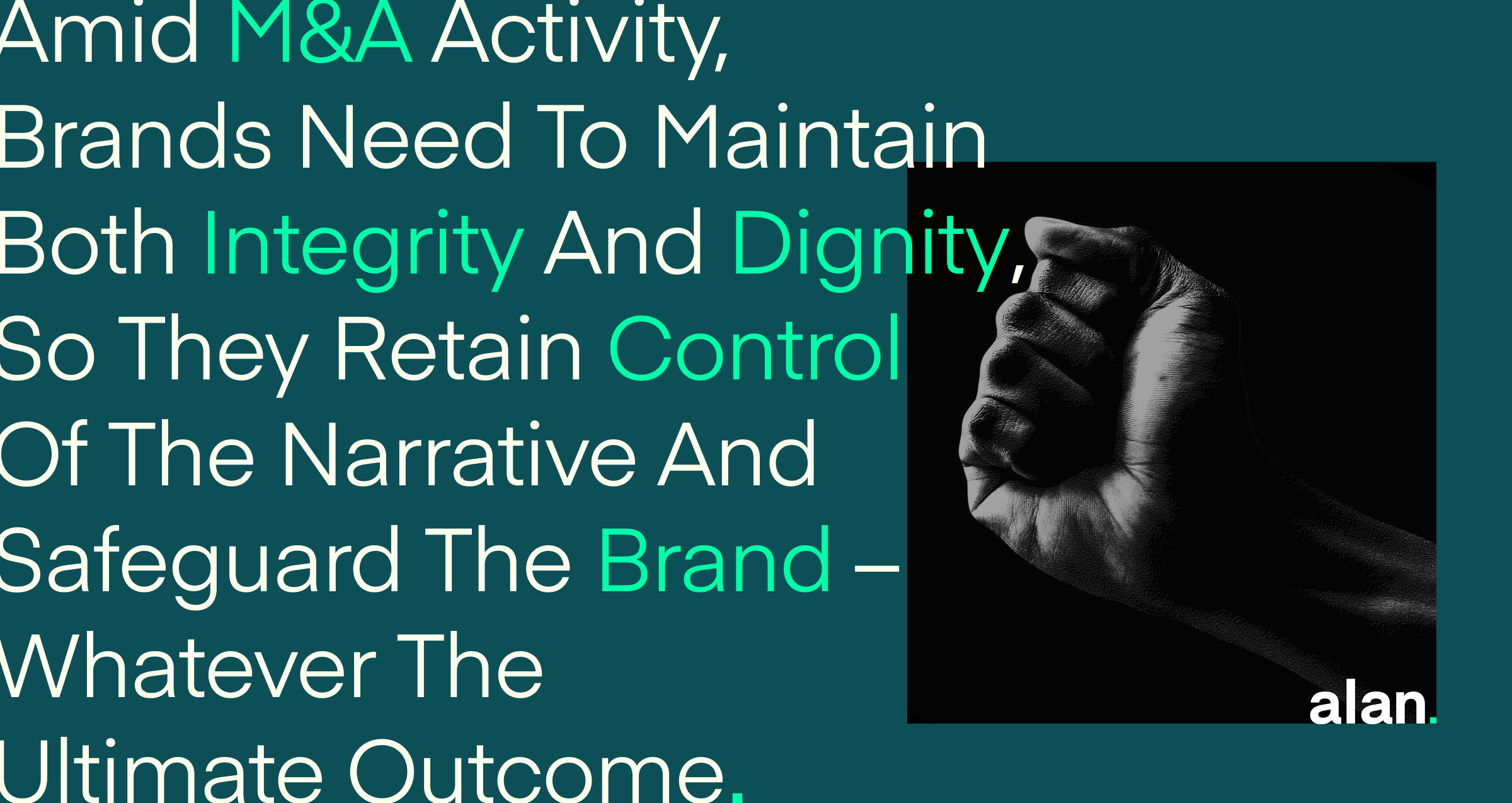 Want to find out more about how alan. can help you with your B2B visceral marketing? Contact us on 020 3877 3800 or email contact@alan-agency.com.

Ready to provoke the truth?